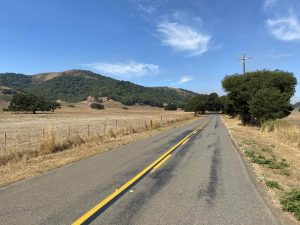 Being a new parent means I have limited ride time these days. When I negotiated a few hours earlier this month, I hunted around for the least-smoky place where I could get in a ride. Marshall-Petaluma Road is one of my favorite roads in the Sonoma/Marin borderlands. Given that it looked relatively smoke-free near Petaluma, I decided to ride Marshall-Petaluma and put it together in a short & snappy loop with Chileno Valley Road, another great cycling road in rural Marin.

My route follows all of Chileno Valley Road, then turns west for five miles on Tomales-Petaluma Road before turning south onto Highway 1. Follow it to Marshall, where you could make a final stop for oysters or a snack at Hog Island Oyster Co. (The day I rode, there was a long, socially-distanced line outside the store—Marshall was probably particularly popular destination, again because of the relative lack of smoke.)

Make a final left turn in Marshall, and head up the “Marshall Wall,” a sudden but not-super-tough 700 foot climb that doesn’t warrant “wall” classification. Then head back towards Petaluma on Marshall-Petaluma Road. Continue straight onto Wilson Hill Road for a final tough but short climb, then you’re near the end.

Highway One from Tomales to Marshall is, surprisingly, not that bad traffic-wise. Tomales-Petaluma Road is the one road here that has enough traffic to be obnoxious, especially later in the day. It can be avoided by backtracking slightly and moving up to Fallon-Two Rock Road, which more or less parallels this route, and avoids 80% of the traffic on Tomales-Petaluma Road. I’ve done that… but honestly, it isn’t worth it. It’s just five miles and two little rollers to Tomales; took me just 20 minutes out of a nearly 3-hour ride. This route minimizes the traffic time and it’s better to just get it over with. 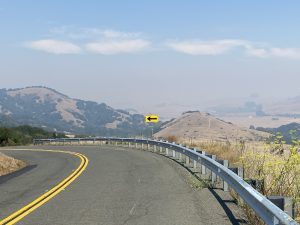 Smoke from the top of Wilson Hill

Marin really shines in the spring after the first rains. So, late summer is not the ideal time to do this ride, or any Marin ride. But for a brief escape from the smoke, this worked great.

Parking costs $7 at Helen Putnam. You could drive back towards town to hunt for free parking, but it would add at least a few garbage miles each way. Ray’s Deli on Western Avenue is a good bet for a post-ride drink or snack, and is right next to the gallery of Mary Fassbinder, a local artist who invited me in to look at her excellent paintings.