This ride includes one of the most fun descents I’ve done, Soquel-San Jose Road. 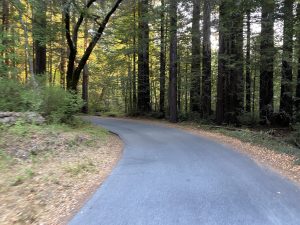 I rode this on Sunday Sept. 6, which may end up being the hottest day of the year throughout the Bay Area. Fortunately, I got going at 7:45am, and was done with the hardest climbing by 9:15. I would have finished even sooner, except that I got weirdly turned around on the first road, Bean Creek—turned around in a way that I rode the whole thing again, in reverse, right back to the start of the ride. I felt like an idiot, but no big deal. I rode one of the nicest parts of the ride twice, and extended the mileage to just shy of 42, which was about perfect.

This route includes four high-quality roads in the Santa Cruz mountains: Bean Creek, Mountain Charlie, Soquel-San Jose, and Laurel Glen. I often look to Jay Rawlins’ bestrides.org when I want to put together a really great ride. Often, I’ll include one of his suggested roads and then add some other riding around it. On this one, I didn’t really improvise on his directions at all (other than the wrong turn!) (1)

The ride starts on Bean Creek, a nice residential up-and-down road in the shade. The major climbing comes on Mountain Charlie road, a dilapidated one-lane that is mostly shaded. Both of these roads are very low-traffic; there’s nothing much on them except some houses as Scotts Valley goes from suburban to rural. I think I saw two cars on Bean Creek and maybe two more on Mtn. Charlie.

Summit Road is unpleasant, with little shoulder and fast-moving cars. But you have to take it to cross under Highway 17. The good news is, it’s over in a few fast miles. 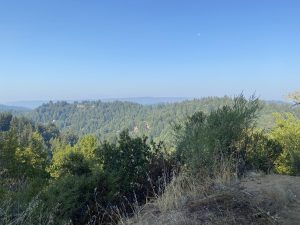 Some smoke at the top of Mtn. Charlie Rd.

As Professor Jay says, Soquel-San Jose is truly one of the great descents. It depends on what you like, but I tend to like broad curves that aren’t technically challenging and don’t make me feel like I need to brake too much. The reality is I’m just somewhat timid on the descent, so I just try to enjoy them rather than maximize my speed and upping my own fear factor. It’s not like I’m going to dominate any Strava rankings anyhow.

Overall, this is a great ride. With no traffic jams, the Scotts Valley starting point is a 70-minute drive from my place in Oakland.  That’s getting to just about the edge of how far I want to drive for a day-trip. In this case, I had already authorized a one-night “Joe-cation” for the ridge, and I relaxed afterwards and stayed the night in a very air-conditioned hotel room in Scotts Valley. 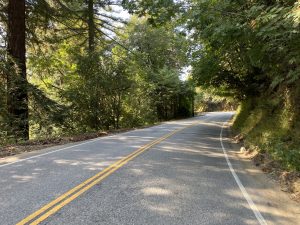 This route was far enough away from the CZU Complex fires that it wasn’t too smoky. There were some Cal Fire trucks around Scotts Valley but not that many; all the evac orders had been lifted, and it wasn’t a ‘war zone’-like feeling. In fact, the way I use this ride in the future might be to check our the air quality listings on days when other parts of the Bay get too smoky. After assiduously watching PurpleAir every day for weeks now, I’ve noticed the Santa Cruz mountains tend to get different air from the rest of the Bay (sometimes worse, but often better).

Another big advantage of this ride is that there’s a lot of shade, and the tough climbs are mostly shaded. It was a great choice for one of the hottest days of the year.

(1) The one change was: for the final return to Scotts Valley, I took Glen Canyon rather than Granite Canyon.